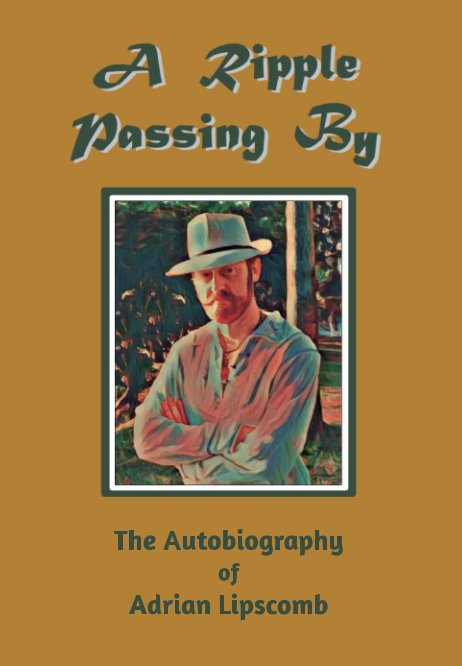 A Ripple Passing By

The Autobiography of Adrian Lipscomb

A Ripple Passing By is both a travel book and an autobiography.
Adrian Lipscomb was born in 1949 in Australia. He attended a private school in Sydney where he acquired an abiding stammer that was to become “the worst thing” in his life. It dominated his existence and instilled in him a desire for solitude – to become a hermit. In his late teenage years, he developed a strategy to deal with his speech impediment. He worked hard to overcome his fears, and in time, he became a fluent and articulate speaker. This then led to a life in which he repeatedly sought to challenge himself in various other ways – to put himself frequently outside his “comfort zone”.
Consequently, he travelled widely throughout the world, and became a keen observer of the foibles, the cultures and the customs of the people he encountered. His wanderings took him to Africa (where he climbed Kilimanjaro) and Israel (where he worked on a kibbutz), and he roamed the Hippie Trail through Iran, Afghanistan, and India. Later, in middle age, his interest shifted to South-east Asia and the South Pacific.
He was particularly enamored of the life and times of his great grandfather, William Simpson, a well-known Scottish artist and journalist who travelled and sketched in remote corners of the world over a century earlier. His journeys frequently retraced Simpson's footsteps.
Adrian’s life has spanned various careers and accomplishments – as a reluctant soldier, an intelligence officer, a hippie vagabond, a frustrated university lecturer, an eco-tourism advisor, a businessman, a travel writer, and a lawyer, among other things. It has not been a perfect life – but it has been interesting – and he has always been just a heartbeat away from that shy young boy with the stammer.

Adrian served with the Australian Army in the early 1970s. He then travelled widely in Africa, the Middle East and South and Southeast Asia. In 1982 he joined the Australian Department of Defence and was Liaison Officer to New Zealand at a time when Australia was trying to steer an even-handed course in its relations with US and NZ despite diplomatic friction between the two over access to New Zealand ports by nuclear-armed or powered warships. In 1994 he worked as Tourism Advisor in the Solomon Islands. He was based in Gizo, the capital of Western Province, and actively assisted many local villages to embark upon eco-tourism enterprises. In 1996 he worked as Associate Lecturer with Southern Cross University. He taught two units: International Tourism Perspectives and Tourism Research Methods. In 1997 he accepted a contract to update and rewrite the Lonely Planet Guide to Papua New Guinea. In 2002 he was admitted as a Legal Practitioner. He retired in 2014.