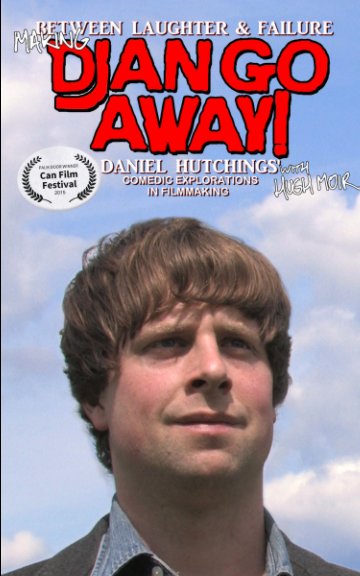 Between Laughter and Failure - Making Django Away! - Pocket Edition

'This film is to Django Unchained what John Carpenter's Dark Star is to Kubrick's 2001 A Space Odyssey'
Damien McFerran, Co-Director, Nlife Network.

At the end of 2012 filmmaker and comedian Daniel Hutchings set out to make a zero-budget movie starring his Freelance Giggle-oh stage persona in an adventure of storytelling. With his costume on, his script in hand and an eye on his camera’s viewfinder, Hutchings simply began filming. The more he filmed, the larger his cast and crew grew, made up of professionals inspired by the story and friends inspired by the filming, all of which helped make the film for the sheer fun of it. The result is an experimentation of the cinematic form and the genre of comedy in a portrait of an individual following where their ideas lead them whether it's a good idea or not.

Hugh Moir's book takes an in-depth look at Hutchings' first 'Thingy'. In interviews Hutchings discuss the evolution of Django Away and the development of his comedic voice in the context of his career to date: from his web-series Hutchings' Half Minute, through his web-com pilot/Django Prologue Hutchings' Half Hour and his test drive of Tarantino inspired comedy in 'Allo 'Allo Basterds, to Django Away and beyond. Moir also includes interviews with some of the Django Away cast, on-set stills, diagrams, equations and visuals essays as well as Hutchings' own script used during production. With all this Moir helps illuminate the effort, vision, ideas, humour and work that went into the film in an attempt to understand it on its own terms.

Between Laughter and Failure is a book for anyone interested in how making stuff leads to stuff being made and all the fulfilment that comes with it.

'A real achievement to make something like that on a micro-budget. I take my hat off to him'
Paul Frift, Producer, Doctor Who.

Presents Inc brings the feature-length art comedies, or Thingys, of Daniel Hutchings to the screen. Each Thingy has an accompanying book that illuminates the thoughts and considerations that went into the making of each Thingy. These book are brought to you by Presents Inc. See all of Hutchings' Thingys in full and for free at PresentsInc.com. Free films from a free filmmaker for free imaginations.