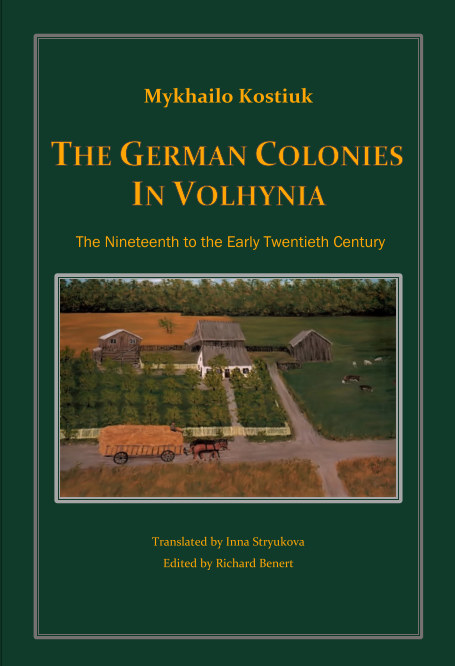 The German Colonies in Volhynia

The Nineteenth to the Early Twentieth Century

During the First World War, a large group of German settlers in Volhynia and surrounding areas of western Russia became early victims of the 20th century’s epidemic of ethnic cleansing. Seen by many Russians as spies and tools of Kaiser Wilhelm, they were easy scapegoats for Russia’s military failures and were unceremoniously sent eastwards to the Volga, Siberia, and elsewhere, many to die along the way from hunger, exposure, and epidemic. At best, two-thirds of them returned to Volhynia after the war, only to become victims of an increasingly oppressive Soviet regime. Their removal to the west by the retreating German army in the early 1940s provided relief, but brought an end to their localized existence as a culture of “Volhynian Germans.”
Yet their nascent cultural identity has lived on in diaspora. Various historical and genealogical societies have preserved many interesting memories and incidents, along with sad statistics of death and persecution. Comprehensive studies, however, have been few, especially in the English-speaking world. The raw material for such studies long lay dormant in restricted Soviet archives, but since their opening, scholars have learned much about the colonies, especially their political relations with the Russian government. The archives also provide an objective basis for looking at daily life, transforming fragmented memories and stories into patterns of activity. This is what Professor Kostiuk’s many years of ethnographic study in the archives have given us, and this translation of his major work provides the first comp-rehensive introduction in English to the history and way of life of the Volhynian Germans. In addition, his extensive list of sources provides a much-needed basis for further reading and research.
Autorenwebsite
https://sggee.org

The Society for German Genealogy in Eastern Europe provides a forum for people interested in the ancestry, culture and history of Germans from Volhynia (modern northwestern Ukraine) and Russian Poland (modern central and eastern Poland). SGGEE assists in research of ancestors with migration connections to Kiev and Podolia in Ukraine, East and West Prussia, Pomerania, Posen, Silesia and other regions of the former German Empire.